News From Malta – a Fuedi Observer

On 25 Oct 07 the celebration of 100 years of the Portuguese Insurance Supervisor (ISP) (www.isp.pt) took place at the Cultural Centre of Belém a magnificent congress centre built in 1993 for the first EU presidency of Portugal.

The Institute of Loss and Risk Management (MILRM) held its first annual general meeting on the 31st October 2007.

Opening this meeting was the President of the MILRM Council, Mr. Hamish Robbie, in which he explained the objectives of the Institute in bringing together students, practitioners and professionals from the Loss and Risk management environments, with a long term view of training, networking and participating in experiences and resources among the respective members.

The date 1st May 2004, was a momentous one, in the colourful history of Malta, when it joined the European Union commented Mr. Robbie. The effect was such that the work force had the opportunity to travel and work in any of the 25 countries, which formed the then enlarged union. It also meant that qualified professionals found their hard earned qualifications were portable to their country of choice, and be immediately recognized, this being one of the main tenets and objectives of MILRM.

The Secretary, Mr. Andre Farrugia, highlighted the activities carried out during the maiden year of 2007 and Council Member, Mr. Bernard Farrugia, explained the intended programme for 2008.

The AGM was followed by a presentation on Salvage and Recovery by Mr. Victor Seguna.

Membership of the Institute is free and those wishing to join may send their e-mail address to info@mitcentre.com to be integrated into the MILRM database. 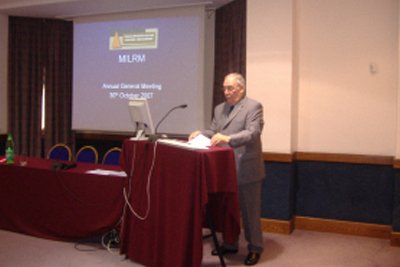 Mr. Hamish Robbie – President of the Malta Institute of Loss and Risk Management addressing the members.