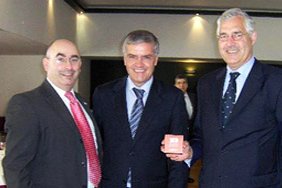 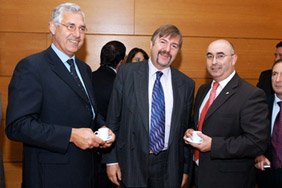 On 25 Oct 07 the celebration of 100 years of the Portuguese Insurance Supervisor (ISP) (www.isp.pt) took place at the Cultural Centre of Belém a magnificent congress centre built in 1993 for the first EU presidency of Portugal.

The focus of the Conference was Solvency II.

In view of the importance of the anniversary the following officials were present:

It was Rui De Almeida, President CNPR, who established an invitation for FUEDI, which was represented by Mark Vos. This FUEDI presence gave our Portuguese loss adjusting member, CNPR, international and EU recognition. Karel van Hulle was pleased to see FUEDI again, as he devotes time to FUEDI when Graham Cave, Marketing/Communications Director, and the FUEDI President visit prior to FUEDI meetings in Brussels.

Solvency regulation will lead to the improved quality of setting loss reserves, meaning that large losses will be exposed to more market attention than ever. Moreover, currently being a costly administrative process, the new legislation will lead to cost reductions in other areas. This cost reduction process may affect loss adjusters, as insurers may look at difference financial models to meet their market objectives and to service their products. The declared attention to consumer protection could mean additional qualified professional requirements.

Information on Solvency I:

Following a period when the providers of insurance by CEA and the national supervisors by CEIOPS (Committee of European Insurance and Occupational Pensions Supervisors, similar to the CEBS for Banking), contribute to the various improvements of technical financial models, the EC will complete its regulation. It is hoped that by the end of 2008 the new regulation will be completed. Thereafter the insurance market will have a window of two years to change its operations and financial structures and to adopt the regulation. In the following two years the Solvency II regulation will to be implemented and will be fully operational by 2012.

Meanwhile some 40% of the insurers have already adopted a process of improving / changing their financial reserve strategies and another 40% are in the process of studying it.

Solvency II regulation is based on so-called three pillars:

The quantitative analysis, which needs to be commonly applied in all 28 countries and in all 5000 insurance companies, although less complex models will be created for smaller companies. When insurers apply financial models in excess of the Solvency II model and have good reason, as for a specialist Catastrophe insurer, then they are allowed to apply the in-house model, which is called Own Risk Solvency Assessment (ORSA)

The risk models, which are used for Solvency II regulation are that insurers should have sufficient capitalisation for the one in 200 years event or even beyond.

Market discipline – which is the enforcement of the regulation upon insurers, is where the supervisor has the authority to request the data and to intervene. The supervisor will intervene between the SCR and MCR level and may request improved capitalisation. Dynamic risk modelling for which Solvency II regulation has not been written will be adopted in time.